The Rise of the A.W.L. by Margaret

When a teacher's secret is revealed, a campaign begins to have them removed from Hogwarts. But how much support does the campaign have within Hogwarts and what lengths are the campaigners willing to go to?

Thanks to SpoonyLupin for the banner.

This story is a sequel to, and contains spoilers for, The Writing on the Wall.

Harry Potter and his friends struggle to move on with their lives after the Second Wizarding War.

Minerva McGonagall finally realizes that what she's wanted has been within her grasp all these years.

For the Make maraudertimes Swoon Challenge

Genre: General
Themes: None
Inclusivity: None
Advisories: None
Series: None

On Shipwreck Beach by nott theodore

A series of stories written for the House Cup.

The Sacred Twenty-Eight by ravenclaw_Scientist

If the truth has been forbidden, we're going to have to break some rules.

Amelia Parkinson seemed like a typical Ravenclaw but ever since Albus Potter and Scorpius Malfoy have gotten family friend Theodore Nott arrested, the press have all over the idea of a secret pure-blood society known as The Sacred Twenty-Eight. With tension building once again within the Wizarding community and strange messages appearing all over Hogwarts, an unlikely group of inter-house Hogwarts students must act to protect their families, save Theodore Nott from life in Azkaban and find out if Delphini really is a Riddle. After all, they all have their NEWTs to pass in peace.

A mixture of news articles and narrative, lots of gay teenagers, Ravenclaw feelings and underage drinking.

Thank you so much to my beta Emma (facingthenorthwind @ HPFT) for making this legible!

Raised by his godfather, following the events of Halloween 1981, Harry spends his childhood, hidden from the Wizarding World, preparing to face his destiny. However, his world is turned upside down when he reunites with the beautiful redhead he rescued down in the Chamber.

Stay With Me by MegGonagall

Amazingly Gorgeous Banner by beyond the rain (@hpft & tda)

No, he wasn’t what most women would have wanted,

but Severus Snape was who she wanted.

With a little help by VaguelyCreativeName

Three months after the Boy Who Lived had been left on his Aunt and Uncle's doorstep in Surrey, Minerva McGonagall is less than impressed with the way he's being treated, so she takes matters into her own hands and bring's Harry to his Great Aunt Rosemary's house.

Here, Harry will grow up - still under the protection of his mother's charm - in a loving home, as he and Rosemary try to navigate their grief together.

It's always the same. Day after day, a new healer, waving a spoon in her face in the hopes that she'll finally concede.

banner by katharos at TDA

What happened during the nineteen years we never got to see, between the

Battle of Hogwarts and the eopilogue? Follow along the story of how our golden

trio recovers from the war and rebuilds the lives they fought so hard for.

An Implosion in Slow Motion by Simplicius

Anyway, this is the sequel to 'A Death in the Family'. I had initially left that story open, with possibility of adding a second chapter just to tie up the loose ends. Well, as they say, "the tale grew in the telling", and now I have this!

This story is slightly narrower in focus than that story was, trading a slimming down of the main cast in favour of a longer overall narrative. With the next-gen kids, we have angst, self-loathing, hormones and relationship drama. The main plot takes place over their hands, with Hermione as our only observer.

A power struggle is unfolding at the highest levels of government, with greater stakes than most people realise, between more faction than most people know exist. The Azkaban escapees are still at large, Harry Potter is hanging onto his job by thread and dark minds are plotting tremendous acts of evil.

The Last Biscuit by ImaRavenclaw

An absolutely delicious biscuit of a banner by kaYLO REN @ tda

At some point Minerva's end had to come,

but she remembered the first biscuit she had offered as if it were yesterday.

For a Time, the Earth Is Still by RonsGirlFriday

Yet They Speak by kuusi palaa

A companion piece for A Woman's Place

Until the Sun Falls by MrsDarcy

For waitress and witch Anne Clarke, life consists of little more than serving tea on a corner of Diagon Alley. But, when the war can no longer be ignored and the teahouse closes down, Anne is compelled to revive her dream of becomming a nurse – a path that leads her to the meandering corridors of Hogwarts, a genteel lycanthrope, and, most regrettably, a long-fingered sock thief.

Pomona Sprout never really liked Severus Snape as a student, but when he joins Hogwarts as the newest Potions master in 1985, she decides to give him the benefit of the doubt and treats him with kindness. It's only when she realizes how much he's taking advantage of her generosity that her animosity towards this man comes rushing back.

*Written for TidalDragon's Knockout Challenge Round One*

All curses are broken by Solmussa

Voldemort is finally conquered at the end of the Battle of Hogwarts.

Sirius is back from beyond the veil to discover that Voldemort's death and that of his Death Eaters means all curses they've ever casted are broken. All of them.

A Woman's Place by kuusi palaa

There are thirty-nine known members of the Order of the Phoenix. Only twelve of them are women.

The memories in your biscuits by Felpata_Lupin

All the truth about Jimmy Portman by Felpata_Lupin

Destiny is the result of people's choices. And any single choice can change it completely.

In this AU the Marauders are still alive and free (more or less...), Neville Longbottom is the guy with the scar, and Harry... Well, just read and find out!

For twins, Evelyn and Elizabeth are very different. Everything from their morals to their memories diverge. When disaster strikes, the girls remove to Hogwarts to live under the guardianship of their Aunt Minerva. With this move comes a mystery that exposes their duality and determines their fate.

I'll Walk That Line by singmetothesun 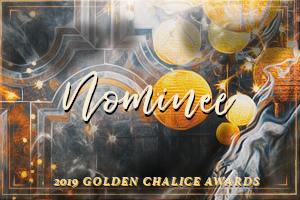 Aesthetic made by me. Golden Chalice graphic by @crowsb4bros.

Albus is suffering and Scorpius takes a stance. Written for Daisy on Twitter.