A Truly Lucky Man by MuggleMaybe

A careless comment from some tosser leads to a fight between George and Angelina.

Written for Round 2 of TidalDragon's KnockOut Challenge, 2020

What Landon and Peters Missed by sinnersandsapphics

Percy Weasley is a pain in the ass on both fronts.

banner by katharos at TDA

What happened during the nineteen years we never got to see, between the

Battle of Hogwarts and the eopilogue? Follow along the story of how our golden

trio recovers from the war and rebuilds the lives they fought so hard for.

Harry Potter and Katie Bell try to prank their old captain, Oliver Wood. Things do not go as planned.

Crack!fic brought inspired by the warped mind of the HPWriterBot.

A collection of one-shots written as gifts to people who donated to the 2019-20 Australian bushfire relief funds. Together, HPFT raised over a thousand dollars for the cause.

With parents, siblings, and children in tow, the Weasley clan sets off for adventure. How will Percy ever be able to maintain his sanity?

The Tower of Stars by Illuminate

Thank you easterlies at TDA! This is a sequel to 'The Joker and Her.'

In the past year, Brienne Christie has suffered the loss of her mother, killed in mysterious circumstances; the upheaval of moving to a different school, and the confusion of a boy-friend who may finally become a boyfriend. But with the Triwizard Tournament looming, friends and foes old and new emerge, and Brienne begins to wonder: Are the walls of Hogwarts enough to keep her safe?

In Love With Love by missclaire17

banner by Lola. at TDA

Darcy Wood believed she knew exactly what love is. Then, Darcy was asked to write a column on the life of James Potter.

James Potter was a Quidditch player extraordinaire and Chaser for Puddlemere United (her father's team, blergh).

Just as Darcy thought she knew what love is, Darcy realized she knew nothing at all.

Skewed Toward Truth by MuggleMaybe

Three times Alicia kissed a boy, and one time she didn't.

Being the next-door neighbor of a living legend does have its disadvantages but in cases where said neighbour is also a wizard it can result in an amazing friendship with your Obliviator … or rather could result in, if only you could remember them.

a little 'stitious by facingthenorthwind

Angelina knew that if she didn’t comply to this childish and nonsensical dare, she’d never live it down.

Hide and Seek by Mistress

When you move at the speed of life, you're bound to crash.

After the war, disgraced Ministry Official Percy Weasley was finally putting together the life he always envisioned for himself.

He had a good job, great boss, beautiful fiancée and a promotion on the horizon.

That is, until he collided with Audrey Elle, the enfant terrible of Europe.

Charlie Weasley had pretty much resigned himself to solitude. He was content with his life, fulfilled by his work, and not particularly interested in seeking out a mate.

Besides, where was he going to find someone else who shared his passion for magical creatures and would want to talk about dragons for hours on end?

Right in the middle of Weasley's Wizard Wheezes, as it turned out.

The battle is over and the war is won. Nineteen years later, all is well. But what happened in between? Voldemort may be gone, but Harry, Ron, Hermione and Ginny now have very different challenges to face as they find their way in a world changed forever.

Keep Away by Mistress

I could kill him. I could ruddy kill him. How was I supposed to try out for his blasted Quidditch team if I couldn't even FLY?! I'd show him. I'd show Oliver-pompous-Wood if I had to fall on my face a thousand times. Which  I did. Oliver/OC

A Rescue in Space and Time by pookha, Levana

In a world of magic, the only thing you should expect is the unexpected. When Angelina and George attempt to save Fred, they learn this first-hand. 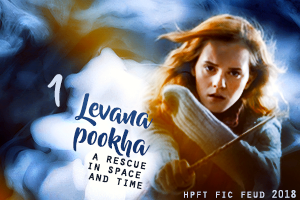 The Joker and Her by Illuminate

Thank you bestlies at TDA!

Since her mother was killed, grief and pain have become the biggest part of Brienne's world. Unable to come to terms with her death, Brienne blindly jumps into the world of Hogwarts School, where she encounters matchmakers, red-headed pranksters, very disturbing dreams and - hopefully - the answer to the ultimate question: Who killed her beloved mother?

Since the day she was born in a shower of sparks, surrounded by Roman candles and Catherine wheels, Roxanne Weasley has been getting into mischief.

These are her stories: polychromatic, dangerous, and impossible.

Lilies by the Lake by ReillyJade

George couldn't believe the nerve of them all. They talked about him as if he were a saint.

It was a pathetic disgrace.

He was always the most...alive person she had ever known.